Alyan’s debut novel explores a Palestinian family caught between present and past, between displacement and home. 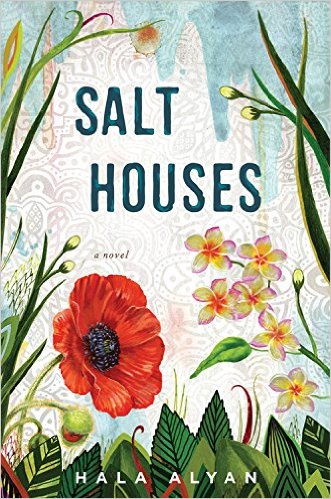 On the eve of her daughter Alia’s wedding, Salma reads the girl’s future in a cup of coffee dregs. She sees an unsettled life for Alia and her children; she also sees travel, and luck. While she chooses to keep her predictions to herself that day, they will all soon come to pass when the family is uprooted in the wake of the Six-Day War of 1967.

Salma is forced to leave her home in Nablus; Alia’s brother gets pulled into a politically militarized world he can’t escape; and Alia and her gentle-spirited husband move to Kuwait City, where they reluctantly build a life with their three children. When Saddam Hussein invades Kuwait in 1990, Alia and her family once again lose their home, their land, and their story as they know it, scattering to Beirut, Paris, Boston, and beyond. Soon Alia’s children begin families of their own, once again navigating the burdens (and blessings) of assimilation in foreign cities.

Lyrical and heartbreaking, Salt Houses is a remarkable debut novel that challenges and humanizes an age-old conflict we might think we understand—one that asks us to confront that most devastating of all truths: you can’t go home again.

“In her debut novel, Alyan tells the story of a Palestinian family that is uprooted by the Six-Day War of 1967 and Saddam Hussein’s invasion of Kuwait in 1990. This heartbreaking and important story examines displacement, belonging, and family in a lyrical style.”

—The Millions, “Most Anticipated: The Great 2017 Book Preview”

“Salt Houses illuminates the heartache and permanent unsettledness experienced by refugees all over the world, reminding readers of the burdens and the blessings of home.”

—Bustle, “15 New Authors You’re Going To Be Obsessed With This Year”

“[Salt Houses is] for those who understand the importance of family and culture, and how easily both can be riven.”

“This timely historical does for the Palestinians what Khaled Hosseini did for the people of Afghanistan. By placing readers inside the hearts and minds of one Arab family scattered from Paris to Boston to Lebanon, she beautifully illustrates the resilience of the human spirit.”

“Alyan’s impressive first novel tracks the dispersal of four generations of a Palestinian family…The Yacoubs’ distinctly personal experiences will mirror the experiences of immigrants and refugees around the world and the Palestinians’ dislocation in particular…. Unexpected, deeply moving…this journey is well worth taking.”

“The war may have only lasted six days, but its impact echoes through generations of a Palestinian family in this ambitious debut novel…This is a moving story about a family’s battle to salvage what remains when their home is taken away.”

“Reading Salt Houses is like having your coffee grounds read: cosmic, foreboding and titillating all at once. In this magnificent debut, Alyan’s powerful and poetic voice guides us into the dark recesses of history and leads us right up to the present tensions between East & West, the modern & ancestral, the hopeless and the hopeful.”

“Hala Alyan’s Salt Houses flies like a searchlight between history and fiction, unearthing the life of a single displaced Palestinian family among the rubble and illuminating it so deeply, so brilliantly,we cannot help but connect the story’s richly imagined past to our very real present.”

—Mira Jacob, author of The Sleepwalkers’ Guide to Dancing

“Salt Houses is a piercingly elegant novel that registers Palestine with deep resonance for what it is: a once beloved home, known, lost, and re-imagined into life. A place where families decide between security and happiness, religion and heritage, where war is constant, yet peace is found. In the exquisite prose of a poet, Hala Alyan shows how we carry our origins in our hearts wherever we may roam, and how that history is calibrated by the places we choose to put down roots. This is a book with the power to both break and mend your heart.”

“As accomplished a poet as she is in her excellent collections of poems, Hala Alyan exceeds those measures of brilliance in her moving, deeply felt, powerfully realized first novel, Salt Houses. I can’t think of many writers, older or younger, who have so adeptly written of family relationships—spanning five generations here, between all manner of older and younger, between siblings, cousins—all, at different ages and stages of life, and all against a vividly rendered backdrop of exile and migration. From Palestine to Jordan, Lebanon to Kuwait, Boston to New York, and back to Palestine again, this is a story of people losing, finding, and making their way. Salt Houses gives voice, body, and love to people whose lives in this country tend, at most, to be featured anonymously in news accounts—and at that, in the negative. This is real life, beautifully written, graciously enlarging the sense of who we are.”

“A striking debut of the disruptions and dispersals of exile, Salt Houses is a heartfelt portrait of the Palestinian diaspora. Powerful, lyrical, and deftly layered with multiple voices, Hala Alyan has done the near impossible: illuminated a half-century of wrenching history with great intimacy.”

—Cristina García, author of King of Cuba and others